A funny thing happened on the way to the Apple store

So a while ago I wrote a blog post about backing up your photos. As we all know (or should know) back up copies of images are an essential part the photographic process in the digital world. But what happens when you are in the field and your equipment breaks. Normally I like to have a bare-bones set of spares for travel.

<< If all you want to read is the funny story I have that at the bottom of the blog...and yes I'm not offended if you skip the long winded preamble to get to the funny part and the pictures >>

Traveling or at least taking your gear into the field can pose a number of technical issues. Typically photographers travel with extra cameras, batteries, lenses, etc. in case something breaks in the field you have a spare and if not have something on-hand to suffice as a work around until you can get a permanent fix.

The focus for redundancies almost always focuses on the camera gear. How many photographers travel with a laptop? What is you plan if it breaks? Do you have a plan 'B'? What happens when your power adapter breaks while in the field?

<< The funny story is still coming but first a few things about power adapters for laptops. >>

For almost as many years as I have been traveling with a laptop I have tried to follow a few simple rules to help ensure success while while on the road. There is two tips that will not necessarily guarantee success but will take care of the top things that I have experienced while on the road.

First thing you need to get is a second power adapter for your laptop. Take the second adapter and stuff it in your travel bag and leave it there. If you plan to travel to foreign countries get yourself a set of wall plug adapters - stuff those into your travel bag and leave them there. A number of years ago I acquired a  power adapter for my laptop that was perfect for traveling. it operated on 110-220 volt AC power as well as being able to be connected to a 12 volt DC cigarette lighter. The adapter was actually designed for a different computer but had been adapted to work on the Macbook Pro. So here are a few suggestions to keep in mind when looking for a second power adapter for your travel bag. Almost all power adapters work on 110-220 volt power systems but it is worth double checking just in case. Power systems in North America operate at 110 volts, power systems in other countries often operate at 220 volts. The old joke is that size matters but in the case of power adapters 'length' matters. Anybody that has stayed at hotels for any length of time has discovered that some rooms are well appointed with power outlets and others are not. With that in mind you want to get a power adapter that has a fairly long cord. The OEM Apple adapter comes supplied with a nice long cord but be careful if you are buying generic brands as these can have shorter lengths. The general rule of 'if it sounds too good to be true it probably is' generally holds true.

For travel outside of North America (or outside of your home power system) you will generally require plug adapters in order to connect to the wall outlets. By buying the 110-220 volt style power adapter all you need to add is a small plug adapter. I have a set of plug adapters which include Europe, Asia, Australia and the United Kingdom. Other than the U.K adapter they are very small and easily stuffed into your travel bag. Leaving these in your travel bag will help ensure that they are there when you need them. It also helps by saving you time not looking for the adapters when you are packing for a trip. The only other essential item that I travel with is a power splitter. Often hotel rooms, meeting rooms have a very limited number of power outlets so a splitter becomes a life saver. My splitter was acquired in the Denden town area of Osaka, Japan. Although not immediately obvious it has a secondary purpose other than being just a splitter. The secret functionality allow a three prong plug to be inserted into a two prong wall outlet. The Japanese do not have a third (ground) plug on their wall outlets. If all you have is your three prong North American power supply you are in for a rough ride when you try to plug it in in Japan.

The funny story: So without further ado here is the funny story. While in Frankfurt a few years ago we were returning to the hotel after being out all day and I decided to start to download my CF cards from the days shooting. Immediately there was a problem, the power adapter was not charging (or supplying power) to the laptop. We were set to leave the following morning to a rural area of Sicilia the chance of finding a power adapter there was slim to none. After a few minutes of panic the plan was to make a mad dash over to the Apple store before they closed. Being within an easy walk I laced my shoes shoes and headed out. I knew the way to the store, the route was simple, just up the street a few blocks then head west for a few blocks. However it did not take long before coming on a road block, a real big road block! There was protesters demonstrating at the European Central Bank building occupying the Willy Brandt Platz area. To keep everything under control or to stop the protest (not sure which) there was a large police presence. In round number there was no less than 500 police officers and nearly as many vehicles. The numbers of officers and support equipment that they had mustered for the protest was truly staggering. 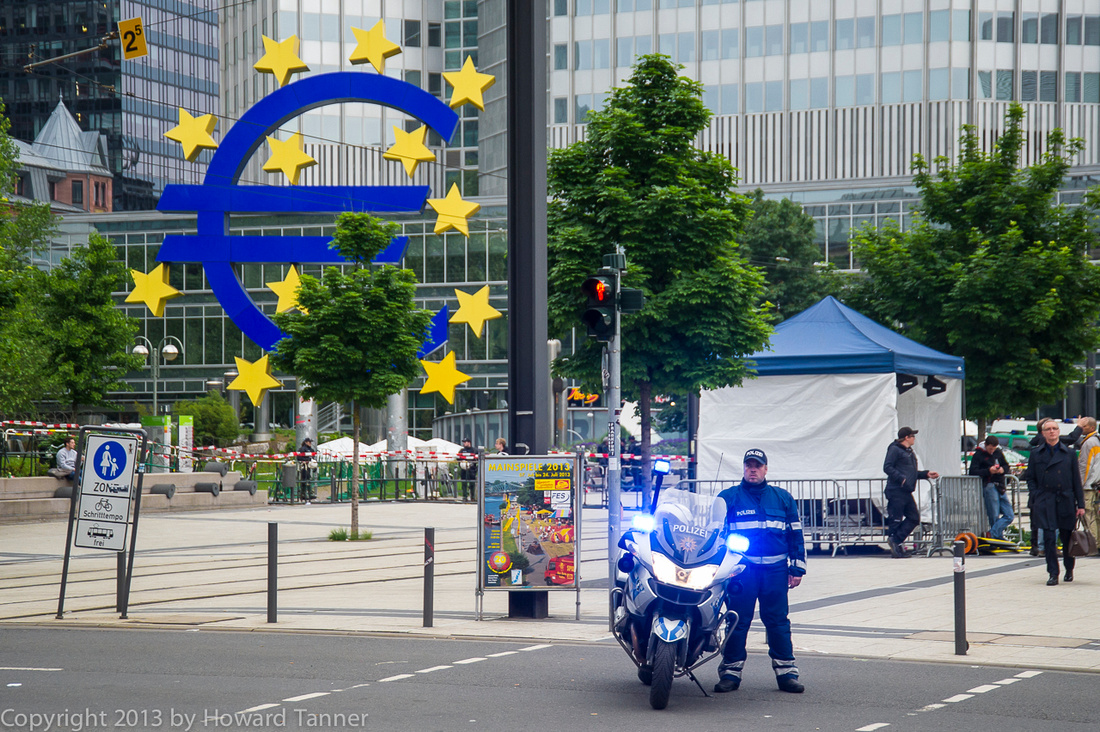 The first encounter with the blockade. No short-cut through the neighbourhood for me tonight. 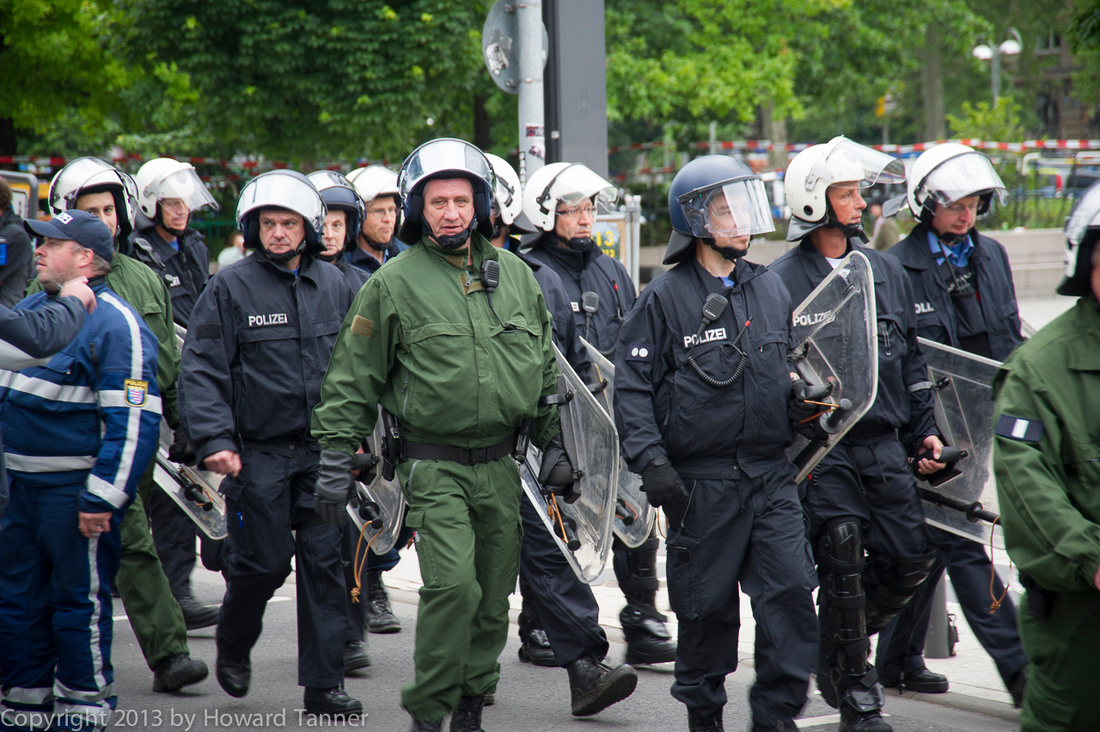 Helmets, shields, clubs, check! All suited up the police head into the front line of the protest.

Some police had green uniforms, others were navy blue. Not sure of the difference although my first thought was the they were all picked because they appear to be very similar in height and build. Must be just a coincidence. 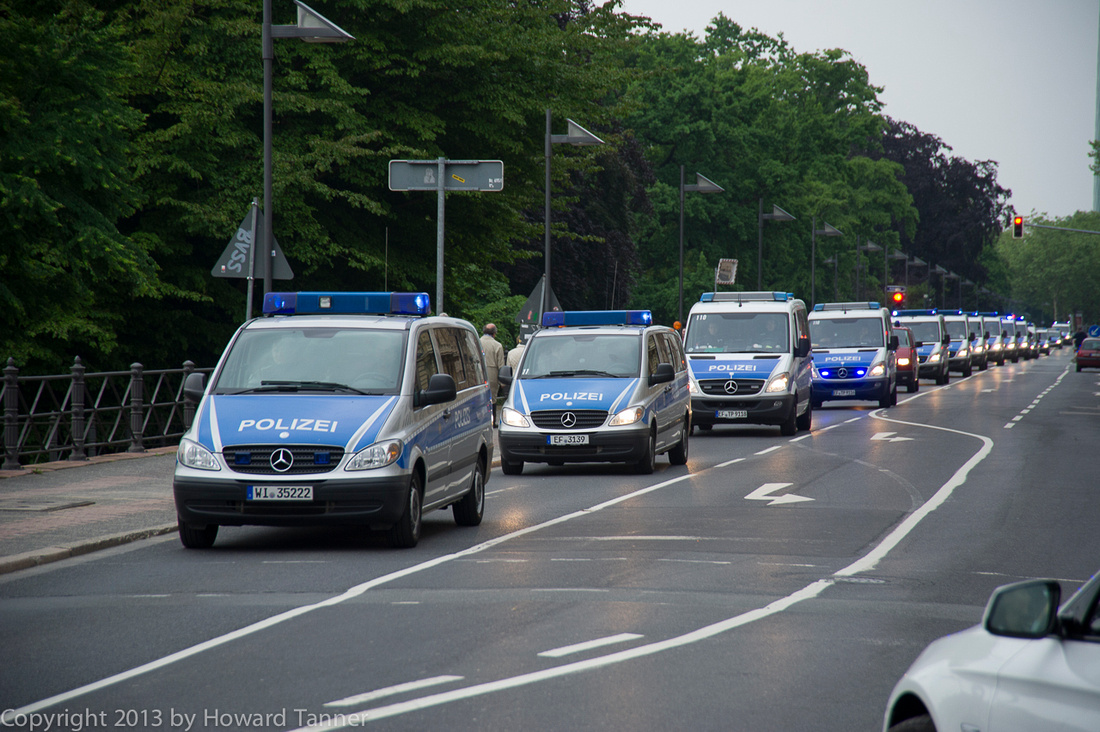 Every where I turned there was another 20, 30, 50 police vehicles. They seemed to come from every direction and in a nearly endless stream. 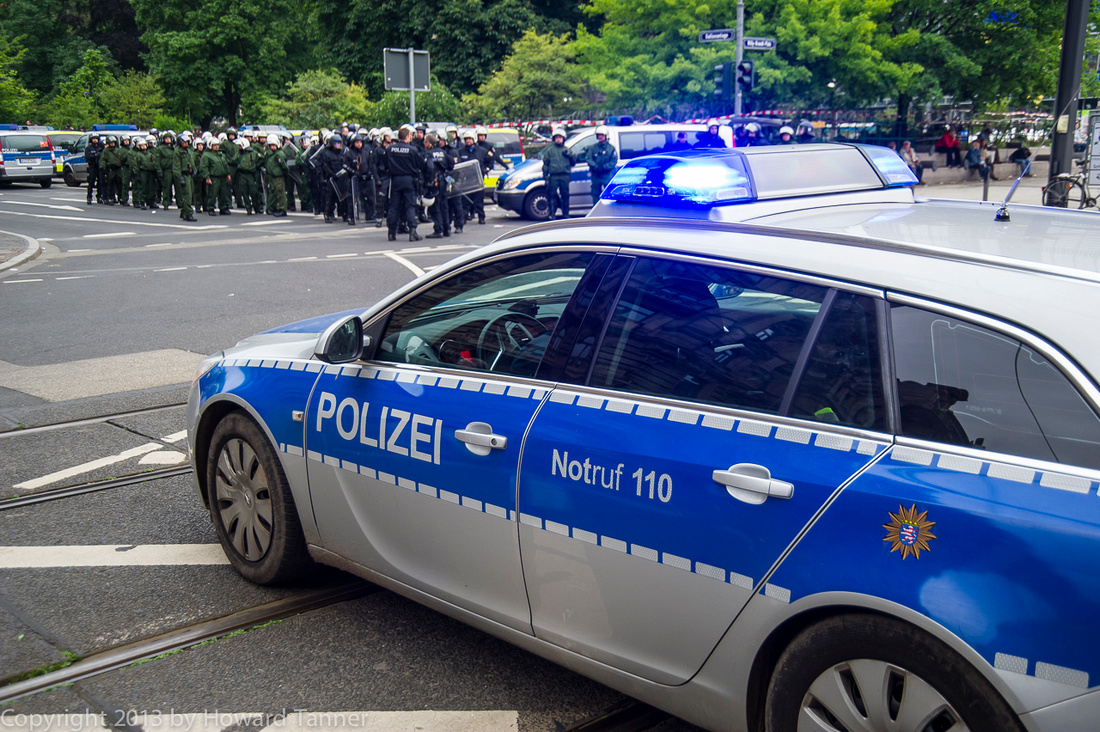 Mustering up the forcesThe entire area around the European Central Bank building was cordoned off. It would have been nice to take some more time to photograph the scene but I had to get to the Apple Store before it closed.

It would have been great to get dug in a bit deeper and hunt for some good editorial images.  Not speaking German and not really understanding what potential problems the police were expecting the decision was made to cover just the exterior of the protest and police presence and then move along. Besides I needed to keep focused and get to the Apple store before they closed. Too bad as it sure would have been fun to get on the inside.

Oh and yes I eventually got the the Apple store and got the adapter and the rest of the trip went very well.